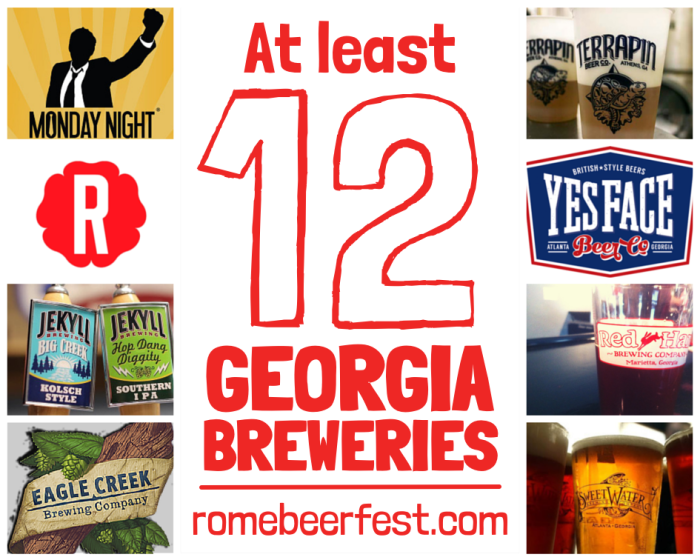 Rome Beer Fest is lucky to feature the many amazing breweries located right here in our home state of Georgia. Recently, members of the Rome Beer Fest planning committee were able to travel to the Eagle Rock Distributing trade show, where we met with some of these fine brewers and tasted the ever-growing number of Georgia-brewed beers.

Although the Beer List is an ever-evolving list, here are 12 beers you definitely won’t want to miss at this year’s fest.

Decatur, GA — We got to meet and chat with the BlueTarp Boys at the Eagle Rock trade show. These guys are great! We recommend listening to The Art of Beer podcast interview with Tom Stahl to find out more about how this awesome brewing company transitioned from a simple homebrew to commercial craft beer.

Statesboro, GA — Fun fact about Eagle Creek (besides brewing some seriously tasty beers), they boast the youngest Head Brewer in the country. Already a seasoned homebrewer, Cole Brown was only 22 years old when he joined the Eagle Creek team.

Hampton, GA — I definitely recommend the Mugshot IPA, which you can get on tap right now by visiting a local favorite and Rome Beer Fest sponsor, Old Havana Cigar. Or you could visit the brewery itself, housed in a renovated jailhouse. Imagine that.

Alpharetta, GA — Jeckyll Island is the home of the first brewery in the Deep South, so it’s no wonder that Jekyll Brewing has some of Georgia’s most delightfully Southern brews, like the ‘Merican Amber Ale and the Hop Dang Diggity Southern IPA.

Atlanta, GA — Beer Fest is on a Saturday, but don’t let that keep you from enjoying one of Monday Night’s many delicious brews. Monday Night beers pair well with food, so we recommend enjoying the Drafty Kilt Scotch Ale with a slice of Mellow Mushroom Pizza.

Marietta, GA — Fun Fact about Red Hare: they were one of the first in Georgia to can their craft beer. If you haven’t already, we recommend trying their signature Watership Brown Ale, and keep your fingers crossed for an appearance by the Hasenpfeffer Oktoberfest.

Woodstock, GA — Reformation Brewing is less than year old, but it’s brewery is based on ancient values and practices. More than just the beer is refreshing at Reformation.

Atlanta, GA — Sweetwater knows that you can’t make good beer without good water. That’s why they’re more than just a beer company; they’re also huge advocates and protectors of rivers in the Southeast. That’s why their summer brew is called the Waterkeeper Hefeweizen.

Athens, GA — Terrapin has great beer, there’s no doubt. One thing to love about the brewery itself is the monthly Lupulin Ladies meet-up — a craft beer tasting and interest group just for women. Cheers!

Griffin, GA — For now anyway, Yes Face Brewing is operating out of the Jailhouse Brewery in Hampton, but these English-style ales are fully capable of standing on their own.  Yes Face? Yes, please.

Don’t miss these awesome beers at this year’s Fest. Get your tickets to Rome Beer Fest now!